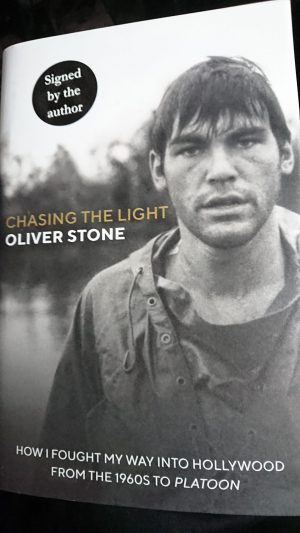 I bought a book. In fact, I blew all my Waterstones points on this sucker.

I couldn’t resist. I tried to resist. Believe me. I kept telling myself that I didn’t need this in my life… But come on, I’d reply. It’s by Oliver Stone: the guy who wrote Midnight Express and Conan The Barbarian, directed Salvador and Platoon, and then became such a big director in my life with his epics JFK, The Doors, and Born on the Fourth of July. Oh, then he made Nixon, which is simply brilliant. Why would I not watch to grab a signed copy when I could?

It’s odd holding this and realising that I’ve not rewatched any of those films in such a long time. Perhaps it’s because he was so big that I’ve not felt compelled to do so. There was a time when I watched them compulsively. Now they feel very much products of their time and perhaps my sensibilities have changed. I don’t know. It feels a lifetime ago since America came to terms with Vietnam. These days, the vets tend to get the respect the country owed them. It was different when Stone made Platoon and BotFoJ. I’d quite like to see Salvador again, though I remember it as a very disturbing movie, and Platoon which was a drop-dead masterpiece. JFK I loved but never quite fathomed how much I should love it. Kennedy killed because of the “military-industrial complex” felt a bit too out there at the time. These days… I’m not so sure. Okay, I’ve convinced myself. I need to watch it again.

The Doors: as a fan of the band before the film came out, I remember being so excited for this. LA Woman is a favourite and track. Kilmere was brilliant in the film but… I’m just not a huge fan of biopics. If Stone hadn’t made it, I might not have watched it.

There were other films of his I enjoyed (Snowden was surprisingly good) but too many that I still need to watch. As a political junkie, I should have already seen W.  The film that shocks me to discover I’ve still not seen (probably because of all the controversy around it at the time) is Natural Born Killers. I don’t know why but, in my mind, I thought it was directed by Tony Scott but, no doubt, I was confusing it with True Romance.