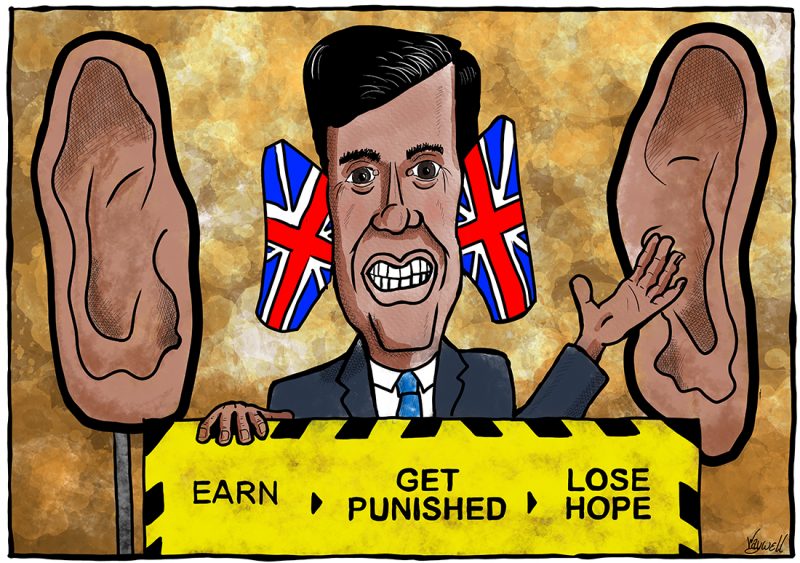 I checked to see I’d be eligible for any of the help the government have so generously offered the self-employed for the past/ongoing three months of lockdown.

And, I admit, at first, I was blinded by the chancellor’s delivery. I believed Rishi Sunak when he stepped up those many weeks ago and said that “nobody will be left behind”. Ooh, cried this shmuck, so reassuring! A future Prime Minister right there… This is what we need in our darkest days.

So today I logged onto the site the government have just set up so we can check if we’re eligible for help. And it said that I was eligible! I would not be left behind!

Hurrah. Relief. The siege of [insert my address here] had been lifted…

Except I then noticed it also said: “Only make a claim if your business has been adversely affected by coronavirus.”

Hmm… So, okay, Doctor Johnson, tell me what on earth that means…

How “adverse” is “adverse”? Did I need to catch the bloody thing or does it count if I’ve not been able to leave the bleeding house for two months? More to the point: how can I know what work I didn’t get when I didn’t get it? Which is what I like to call “Problem Number One”.

How do you measure an absence of something?

How do I know my life would have been different if I turned right that morning in the Spring of 2003?

Had Hitler succumbed to ball surgery in 1916, would the world have lived in peace for the rest of the twentieth century?

And that’s the problem. As a writer, I rarely have months when my income is the same. Different places pay different amounts and though the places that pay best aren’t that regular, I sometimes get lucky. Once or twice or five times a year, I might land a writing gig that makes a *huge* difference.

So, how do I know if the virus has stopped me getting one of those jobs in the past three months? I can’t possibly know. I do know that I *haven’t* landed one of those gigs. But, as the old axiom goes: correlation does not imply causation.

Which leads me to Problem Number Two.

Problem Two is a much bigger problem. You see, I live my life from deep inside the pocket of the benefits trap. Trust me: I’ve not chosen this life. Despite the smears that the likes of Iain Duncan Smith peddle, not all of us on benefits choose this life because we’re lazy. I mean, I didn’t choose to be this broke because I’m one of those workshy types who has some managed to never do a jot yet ended up with FOUR FUCKING DEGREES…

I am a carer because of duty, not choice. I hate that word anyway because it makes me sound like something that I’m not: a professional who picked this path. I’m just a person who had relatives that needed help and I stepped up when they needed me. They also just happen to be in the group considered particularly vulnerable to the virus. And for all the effort I put into this caring (ignoring the sacrifices I’m making and yes, the thought of still being in lockdown when the rest of the world is out buying newspapers and enjoying picnics is driving me a bit crazy), I get a small benefit. And I mean “small”. The kind of money some people blow on a bottle of wine…

See where I’m going with this?

Whatever I earn through self-employment then gets knocked off what I earn from caring. In other words: if I earn too much through self-employment, I’ll get nothing for all the other duties I perform, all that cooking, the cleaning, the shopping, the… well, I needn’t paint a picture though in my spare time I also do that as well (see top of this blog).

Now, in an ideal world, I wouldn’t need the benefit and I would happily give it up if I could just guarantee enough from self-employment to live on. But, of course, self-employment doesn’t work like that. Certainly, it doesn’t work like that when you write for a living. Nothing is certain, month to month. I can have good months but I have bad months.

Which brings me back to the government’s offer of help…

They originally said that all self-employed people would get help. Nobody would be left behind, or some such meaningless jargon. And, yes, it is meaningless because that assurance has now become: “Only make a claim if your business has been adversely affected by coronavirus.”

And I have no idea what that means. If I was a builder (I wish), pulling in £2000 a month, I’d now be certain of £1600 x 3 in my bank account in the middle of May. But because I’m *nowhere* near that… Even keeping people fed has become more expensive (home deliveries since I don’t have a car, limited choice so more expensive items, fewer multibuys). On top of that, I’ve actually seen a significant decline in my income thanks to the weird calculations that makes benefits fluctuate over the year.

I know that in the middle of a health crisis, with so many people dying, my problems are trivial. It’s just a matter of tightening the belt, which I assume is the government’s logic in this. If you were previously comfortable, then the lockdown would be a shock. They will help you. If you were already struggling… Meh, You’re used to it. It’s just more of the same. And perhaps that’s why the help is going to those higher up the food chain.

And that gets to the root of the problem: the government’s plans are generous to the better off but are meaningless to those of us stuck much closer to the bottom. Quite literally: I’m not rich enough to be able to apply for help. Because if I did, it would leave me poorer next year when they’d punish me for needing it now.

2 thoughts on “The Amazing Generosity of Rishi Sunak”